The Centers for Disease Control and Prevention (CDC) is the national public health institute of the United States. The CDC is a federal agency under the Department of Health and Human Services and is headquartered in Atlanta, Georgia. Its main goal is to protect public health and safety through the control and prevention of disease, injury, and disability. The CDC focuses national attention on developing and applying disease control and prevention. It especially focuses its attention on infectious disease, food borne pathogens, environmental health, occupational safety and health, health promotion, injury prevention, and educational activities designed to improve the health of United States citizens.[1] The CDC combats emerging diseases and other health risks, including birth defects, West Nile virus, avian influenza, swine influenza, pandemic flu, E. coli, and bioterrorism, to name a few. In addition, the CDC researches and provides information on non-infectious diseases such as obesity and diabetes and is a founding member of the International Association of National Public Health Institutes.

The CDC has one of the few biosafety level 4 laboratories in the country,[2] as well as one of only two official repositories of smallpox in the world. The second smallpox store resides at the State Research Center of Virology and Biotechnology VECTOR in the Russian Federation.[3]

The Communicable Disease Center was founded July 1, 1946 as the successor to the World War II Malaria Control in War Areas program[4] of the Office of National Defense Malaria Control Activities.[5] Preceding its founding, organizations with global influence in malaria control were the Malaria Commission of the League of Nations and the Rockefeller Foundation, which supported malaria control, sought to have the governments take over some of its efforts, and collaborated with the agency.[6][7]

The new agency was a branch of the U.S. Public Health Service, and Atlanta was chosen as the location because malaria was endemic in the South. Offices were located on the sixth floor of the Volunteer Building on Peachtree Street. With a budget at the time of about $1 million, 59 percent of its personnel were engaged in mosquito abatement and habitat control, with the objective of control and eradication of malaria in the United States.[8] Among its 369 employees, the main jobs at CDC were originally entomology and engineering. In CDC's initial years, more than six and a half million homes were sprayed, mostly with DDT. In 1946, there were only seven medical officers on duty, represented by an early organization chart drawn in the shape of a mosquito.

Under Dr. Joseph Mountin the CDC continued to advocate for public health issues and pushed to extend its responsibilities to many other communicable diseases. In 1947, the CDC made a token payment of $10 to Emory University for 15 acres (61,000 m2) of land on Clifton Road in DeKalb County, still the home of CDC headquarters today. CDC employees collected the money to make the purchase. The benefactor behind the "gift" was Robert Woodruff, chairman of the board of The Coca-Cola Company. Woodruff had a long-time interest in malaria control, which had been a problem in areas where he went hunting. The same year, the PHS transferred its San Francisco based plague laboratory into the CDC as the Epidemiology Division, and a new Veterinary Diseases Division was established.[4]

The agency then went through a series of name changes: the National Communicable Disease Center (NCDC) on July 1, 1967; the Center for Disease Control (CDC) on June 24, 1970; and the Centers for Disease Control on October 14, 1980.[5] An act of the United States Congress appended the words "and Prevention" to the name effective October 27, 1992. However, Congress directed that the initialism "CDC" be retained because of its name recognition.[10] CDC now operates under the Department of Health and Human Services umbrella.

Diseases with which the CDC is involved 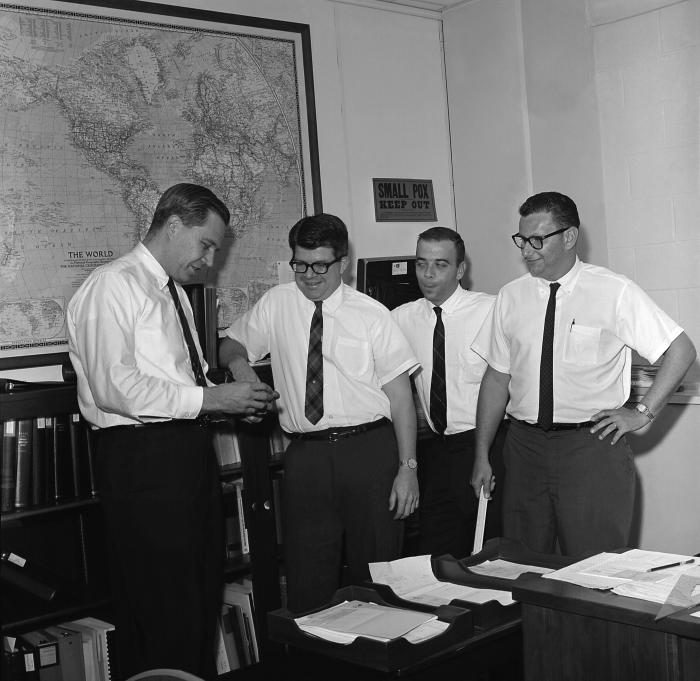 The CDC has also done its part in fighting and providing information on other infectious diseases, including smallpox, measles, and others.

The CDC also runs a program that protects the public from rare and dangerous substances such as anthrax and the Ebola virus. The program, called the Select Agents Program, calls for inspections of labs in the U.S. that work with dangerous pathogens.[11]

The CDC also combats non-infectious diseases, including diabetes and obesity.[12]

A few elements of this article are reused from the Wikipedia article.